Core Principle of the Modes

The key to playing the modes is your note selection based on the chord that is currently being played.  Keep this in mind throughout the entire lesson.

Modes can be derived from the major scale and contain the same exact notes.  Why learn a new name for the same set of notes?  The main reason is to help you focus on the tonal center of the chord instead of the tonal center of  the scale.  This shift in thinking will help you unlock new sounds.  It will also help you play over ANY chord, even those obscure ones that pop up.

The two reasons to play the modes:

Doesn’t that sound useful?  The good news is that the modes are as easy to play as the major scale.  In this lesson, I’m going to show you the two ways that people learn the modes.  In my opinion, the best method depends on how you learn.  I’ve heard passionate arguments for both, so I will provide both.

Before we talk about modes, we must talk about harmony, because learning modes is all about the interplay of the harmony (chords) and the mode.  To fully understand the modes and to use them correctly, you must know this theory.  Most mode lessons confuse people because they skip this information.

If you don’t have a strong understanding of the major scale, keys, chord construction, and diatonic harmony, you may want to purchase Guitar Lesson World The Book which covers all these topics (including the modes and much more).  Playing the modes is easy, but understanding them takes a good working knowledge of music theory.

Diatonic harmony is about knowing the chords that come from a key.  Most songs are written in a key.  Keys have a tonal center, or tonic, which the harmony will gravitate towards.  Chord progressions within a key are considered diatonic chord progressions.  They contain chords which only use the notes of the key.  There are a few more things to know, but let’s make sure we know enough about keys and diatonic harmony.

When you play in the key of C, the chord progressions gravitate toward a C major chord.  In other words, when you play a C note it feels like the song is done.  It relieves all the tension.  To learn this feeling, play the following chord progression C-F-G.  It should sound unfinished.  Now play C-F-G-C.  It will sound finished.  This is what I mean by gravitating or resolving to C.

The key of C uses the C major scale, which consists of 7 notes: C, D, E, F, G, A, B.  Each of these notes map to a degree of the scale, which is a roman numeral indicating the order within the major scale.  I=C, ii=D, iii=E, IV=F, V=G, vi=A, vii=B.  You’ll notice that I capitalized some of the degrees and left others in lower case.  I’ll explain this later.

Each degree also maps to a particular chord.  If you use only these chords, you are playing a diatonic harmony or a diatonic chord progression.  You will notice that the upper-case numerals use major chords and the lower case numerals use minor chords.  The vii is diminished, which includes a b3 (minor third) so it is also lower case.  It is called diminished instead of minor because it also has a flatted fifth.

What this tells you is that you can take the major scale, the degree, and the related chord and form a diatonic chord progression.  For example, in the key of C, you would have the following chords:

You can also have chord extensions like seventh chords, ninth chords, etc.  I will cover those later in this lesson.

How Modes Relate to Diatonic Harmony

This is where it gets interesting.  Each of the 7 modes map to the same degrees as the chords mentioned above.

You learned that diatonic chords all gravitate toward the tonic (I chord).  When you play a chord, the notes within that chord gravitate toward the root of the chord.  You have two gravitational pulls.  Modes help you highlight the chord’s gravity.  The feel changes because of the harmony it is played over.  In other words, the chord progression relates to the song’s gravity.  The mode relates to the chord’s gravity.  When played properly, it will highlight the chord and its harmony.  I will go over how to play them properly later in this lesson.

Listen to the Modes

Below, you can listen to each mode played note by note over the matching diatonic 7th chord.  The chord will repeat every measure.  The mode will start in measure two and play all the notes plus the octave. Starting with measure 2, I play one note of the mode per measure.  All the notes should sound good, but some sound better than the others.  Let your ears tell you the best notes.  It should change from mode to mode.  Listen a few times to see if you can pick them out.

All the notes are good, but the best ones change with the mode.  This is why we need the modes!

Feels Sometimes Associated with the Modes

Although the feel of the modes is personal and based on note selection above all else, Modes are sometimes related to a certain feel.  I listed some descriptions. Play a mode over a progression and see if you can pick out similar qualities.

Let’s review the theory you learned in this section before I continue.

Modes in a Key or Series

Modes should not be used like a scale, rather they should be used as a framework to find the best notes for the given chord.

The selection of notes is a key point that you should not forget.  If you don’t highlight the better notes of the mode as they relate to the chord, you will not get the feel of the mode.  This method doesn’t tell you much about that, which is why some people dislike teaching the modes this way.

If you don’t highlight the notes of the mode as they relate to the chord, you will not get the feel of the mode.

Another way of learning the modes is in parallel.  This means that you forget the key and learn modes that start from a single note.  For example, C Ionian, C Dorian, C Phrygian, etc.  To do this, you must know how to modify the major scale to form the desired mode.

Learning modes in parallel is great for two reasons.

You can combine the table above with the chord construction formulas to determine the seventh chords that can be played over the modes.

I just made a big implication.  These 7th chords are part of diatonic harmony too. They are noticeable when you discuss modes in parallel along with chord formulas.  The table below expands on the diatonic chord options we discussed earlier.  You’ll notice that we added chords but some modes are played over the same exact chords.  For example, the ii, iii, and vi degree modes can be played over the same chord types.  In the next section, we’ll discuss some chord extentions which will differentiate these even more.

When using seventh chords without extensions, use the following chart to find a compatible mode.

Chord extensions can throw a small wrench in this simplistic approach because they use the 2nd, 4th, and 6th degrees of a scale (also known as the 9th, 11th, and 13th).  The following general rules apply if you have a chord with a 9th, 11th, and 13th

Chord extensions are advanced harmonies.  If you’re new to modes, remember that the mode options go down as the chord complexity goes up.  Once you’ve mastered playing over seventh chords,  you can be more selective with chord extensions.

Mode options go down as the chord complexity goes up.

Before moving on to the next section, which goes over all the modal patterns, let’s review what we’ve learned.

How to Play the Modes

Finally, I am getting to actionable part of the lesson.  Make sure you fully understand the theory above.  Without it, modes will not feel useful.  The good news is that modes are often a rut-breaker because they enable  you to play in new and exciting ways.

Mode Patterns in a Key or Series

You can combine the two patterns to create a box pattern or to create a diagonal pattern.  Practice moving these patterns to other string sets (don’t forget to shift the pattern when you use the 2nd and 1st strings).

I know this was a loaded lesson.  Modes are easy to learn from a pattern standpoint, but have a lot of depth in their usage.  Take your time to play and listen to the notes you use as you play the diatonic progressions.  This is the only way that you will truly learn to use the modes effectively! 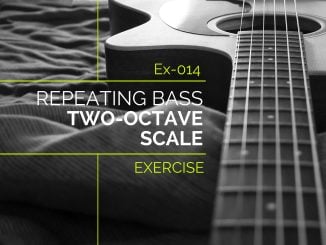 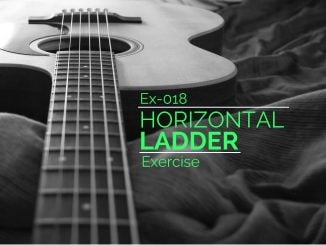 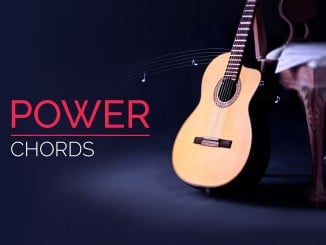