Did you know that there are at least 21 parts of a guitar for a beginner to learn? In this lesson, I’ll show you the parts of an electric guitar and an acoustic guitar. I’ll also show you the standard tuning, how strings are numbered, and how frets are numbered.

The Parts of a Guitar

Generally speaking, there are two types of guitars: acoustic and electric. Luthiers, or guitar makers, build acoustic guitars so they can be played without amplification. Electric guitars require an amplifier to produce a sound loud enough to hear well.

Despite their differences, electric and acoustic guitars are played the same way.

Several guitar parts are common to both acoustics and electrics, others are specific.

Strings are numbered from the thinnest string (1st string) to the thickest string (6th string). The tuning is given from the 6th string to the 1st string: E-A-D-G-B-E. This tuning (E-A-D-G-B-E) is called standard tuning. 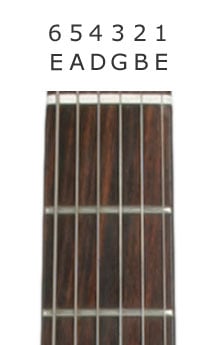 Notes are named using the first seven letters of the alphabet, however there are more than seven pitches, or notes, produced on the guitar. The note names, or letters, repeat themselves. For example: the note name after G is A: … E-F-G-A-B-C-D-E-F-G-A-B-C …

Frets are numbered from the headstock toward the body starting with 1. Sometimes the number 0 or letter O is used to denote an open string, or one that is played without fretting a note.

Fretting a note is executed by pressing the string down behind a fret (on the headstock side of the fret).

Guitarists can move horizontally up or down the fretboard, or vertically across the fretboard. These are common terms used to communicate how to shift your hands when playing the guitar. 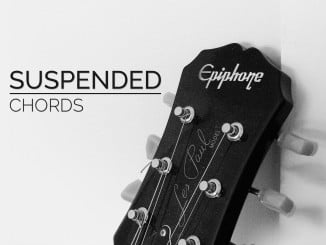 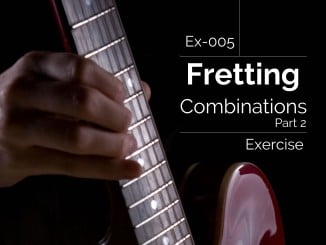